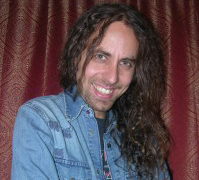 John Madera’s fiction and criticism has appeared in many print and online venues, including Conjunctions. He edits Big Other and lives in New York City.

The Querent
by Courtney Michelle Lindley
September 28, 2022
When you were the size of a fist, a coyote dragged a three-year-old Angeleno out of the living room by the Peter Pan collar of her pale yellow shirt. She survived but was left with a sizable scar on her cheek. The scar resembled an American flag, pocks for stars and gouges for stripes. Her mother was on the news all the time, which led to the child signing a deal with an agency, and quite soon after that, the child and her scar started appearing on billboards as the new face of a California restaurant chain that sold bratwursts. Last month, for reasons unrelated, the little girl passed away.
The querent used to say we come back as either human or animal, that in the spirit world, there is no delineation.
It’s nice to think the end isn’t the end.
Though I wouldn’t dare say that to the dead girl’s mother.
The City
by Matt Greene
September 21, 2022
What we had done was trample on Johnson’s city, four sheets of paper, loosely placed side by side, with buildings growing in no particular visual perspective, some upwards, some in profile, some in three dimensions but others in blueprint, and this, we felt intuitively, was a triumph of Johnson’s city, or would-be city, it’s resistance to confinement, its ability to transcend.

And we sat with Johnson. We consoled. We patted Johnson on the back and said that we might rebuild it, that it could be rebuilt. That it could be better and that we could help.

We collected the roll of white butcher paper from its mount and unfurled it across the linoleum, gathered the colored pencils, the crayons and scented markers and watercolors and even the Sharpies we’d hidden in our cubbies. We collected scissors and Scotch tape, and began to connect the sheets of paper, for there would be no limit to what we could design.
Five Poems from Chariot
by Timothy Donnelly
September 14, 2022
Nocturne

Midnight at the pit of my irrelevance:
a hair’s breadth away, I step closer to the mouth of it, no more afraid to
shake hands with my lacuna than a bird is of the air
whistling in its bones. To stay possible as long as possible

had felt like enough now—a persistence of streaks
in soft butter yellow shed from the clock tower onto the indigo-
freaked slate-to-black vagueness
that indicates the river. The light lives