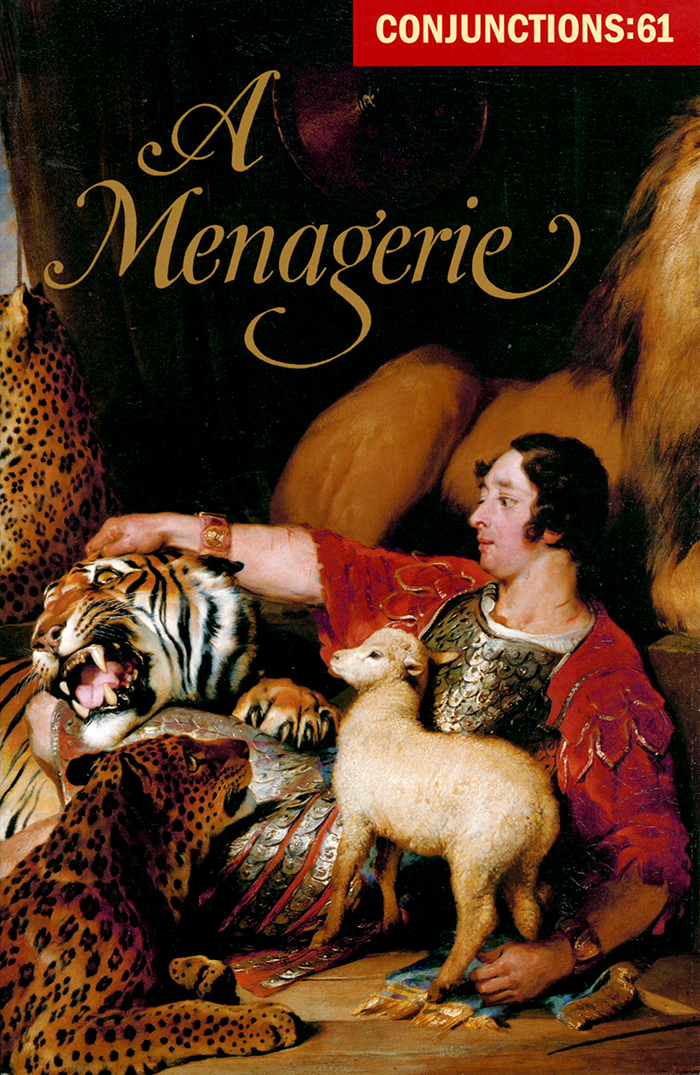 A circus lion gets loose in a small town in the Midwest. A rhinoceros languishes in his pen on the Boulevard du Temple as the French Revolution rages outside. B. F. Skinner’s research pigeons are conscripted to guide WWII aircraft. An eyewitness offers a true account of hunting for okapi with the Mbuti people in Uganda. A medieval monk journeys to the Holy Land in search of a unicorn. From snow leopards to kraits, lemurs to lions, okapi to eels, pigeons to dogs, rhinos to wolves, giraffes to squirrels, gators to crocodiles, cats to cows, A Menagerie gathers writings about the vast world of our fellow beasts who occupy the earth, oceans, and sky.

Sharing a deep interest in animals and having both worked on books in which they play central roles, we decided to approach a number of very different authors with the simple proposal that they write about an animal of their choice. The choices—not only of subjects but of forms in which the works are composed—were more diverse than either of us expected, resulting in a literary bestiary of delightful range. Ben arranged an interview with the great animal scientist Temple Grandin, and Brad discovered his previously untranscribed conversation about animals with William Burroughs from many years ago, making this menagerie anthology all the more diversified.

We hope readers who have a like-minded love for animals will enjoy this collection of fictions, nonfictions, poems, documents, dialogues, observations, fantasies, speculations, dreams, and zoologies.

To see announcements of new issue themes or to keep up with our issues as they develop, follow us on Facebook and Twitter and join our newsletter.
Cover art by Edwin Henry Landseer (1802–1873): Isaac van Amburgh and His Animals, 1839, oil on canvas, 44.5" x 68.9".

Some Early Exxxperiments in Behavioral Science: A Bird’s-Eye View

Dale Peterson
Where Have All the Animals Gone?
Susan Daitch