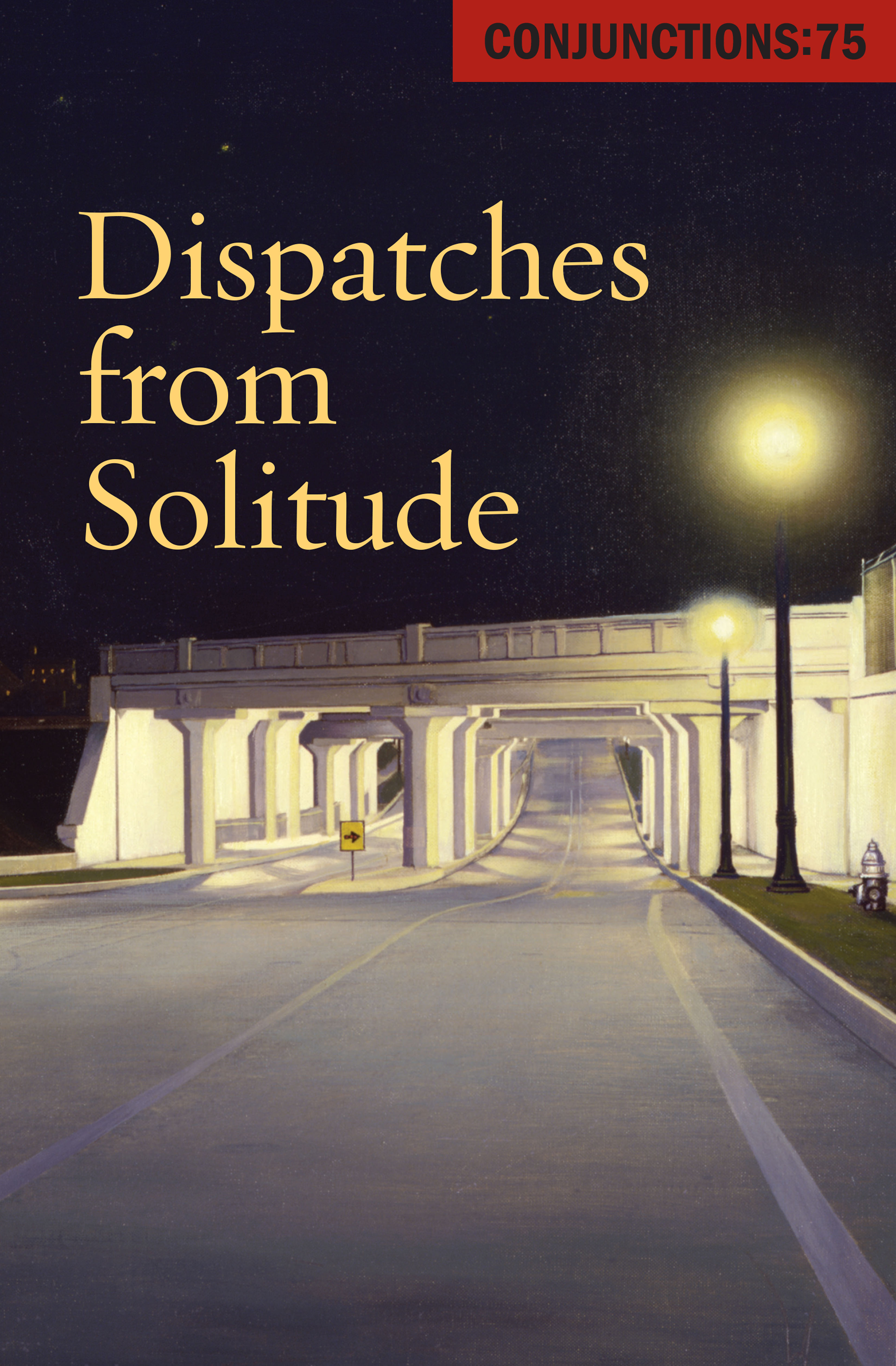 While plagues have historically fostered every kind of loss—of freedom, of livelihood, of hope, of life itself—the isolation of grim eras such as the one we are now experiencing can also provoke introspection, fresh curiosity, and, with luck and mettle, singular creativity. If necessity is the mother of invention, so can deprivation generate art that might not otherwise have come into being, the constraints of sequestration thus giving rise to many voices and visions.

Blaise Pascal famously wrote, “All of humanity’s problems stem from man’s inability to sit quietly in a room alone.” While the writings in Conjunctions:75, Dispatches from Solitude, cannot resolve all of humanity’s problems, they tend toward celebrating, even in ways that aren’t all bliss and rainbows, the myriad meanings of what it is to be alive at a time of full-on global affliction. The very act of writing, no matter how sociable and gregarious a writer may be when stepping away from the worktable, is customarily one of solitude. The writer is often alone, often mute, detached from the world outside the window, scarcely moving for hours on end as whole prodigious universes emerge in graphite word trails on paper or pixelated sentences on laptop screens. It’s from this solitude that the literary dispatches here all derive, carrying the reader off into worlds far beyond any hermitage.

For our seventy-fifth issue, we have gathered fiction, poetry, essays, and genre-bending work from writers far and wide who—despite the deficits of quarantine, self-isolation, and distancing—are closely bonded by a shared embrace of the written word and its ineffable powers of expression.

To see announcements of new issue themes or to keep up with our issues as they develop, follow us on Facebook and Twitter and join our newsletter.
View Issue

All Cities Burn
by Katharine Coldiron
The smell was profound, suffocating, singular. My skin and clothes stank until I washed them; I had to stop at a gas station and wet my shoes under a faucet and scrub them with disintegrating Kleenex because the smell hung so potently in my car. It was dead fish and bird droppings and the bottom edge of a body of water, brought to the light and baked too hot. I once visited a blooming corpse flower at the Huntington and it smelled alive, at least. This was death of a hundred kinds braided together.
Three Poems
by Elizabeth Robinson
Where there is no fact, there can be no consolation.

We chose to be plural in the presumed grace of what

is presumed to be moving in the dark.
Nuntle Shtuli
by C. P. Boyko
You, Shtuli, went to a school and sang a few songs.
The children, with skybright eyes, listened rapt, their mouths hanging moistly open.

Strumming my balalaika, I, Shtuli, sang.

Shtuli, you asked Asfalyi, your child, to come to a noisejazz concert with you.
“I’d rather stay home and read my grimoire tonight, to be honest, Boombi,” Asfalyi said.
“That’s all right,” you gloomily said. “I’ll go by myself.”
Falls and Deadlocks
by Rebecca Lilly
Fossilized by an inner stare
at an eroded mountain, the hollows
in cloudy blue rounds, I can’t speak
for the lump in my throat (self-doubt,
a bud vase’s short lyrics of flowers

stalk is a matter of self-
denial and solace.
The Tungsten Record
by Tim Horvath
Send more Chuck Berry, went the joke—how the aliens would reply when they got their first spin of the Golden Record on the Voyager. Sweet, friendly aliens with toe-tapping rhythm (whether or not they had feet), an appreciation for sweat and guitar riffs pooling together even if they had no first-hand experience with either.
Two Poems
by William Archila
I like the black & white. I like
the mirage they create. I like
planes. I like stray dogs
who never forget where I come from.
Lockdown
(Ashram, North India)
by Mary Marbourg
The woman knocking on my door has a dilemma. She only has x-amount of time per day to dedicate to prayer. So, on whom should she focus her prayers? The migrants who are starving, the people with the virus, or those of us stuck here? If us, which one of us? How much should self-interest factor in? Should she pray the most for the woman with the slight heart condition or the woman she most wants to leave the ashram?
Eleison for Solo Migration
by Quintan Ana Wikswo
The birds here
Have not changed
They drop salt not seeds
Into my open mouth

Now—my back bare to the sky
Breasts buried in soil
Thrust into the darkness of this
Searching out each star
Rigmarole
by Sarah Gridley
A poem listens
to both rooms from the middle
ground of its title, the threshold strip

Four Poems
by Elizabeth Metzger
An exhibit was all you wanted

and me to lay close
my face

like a film behind a curtain
Rural America, 1974
by Thom Conroy
When I thought of their home life, I pictured them hunched beside flame, firelight bringing out grime on their faces.

Between my mother and grandmother, Mrs. Hufferman is always referred to as Lilly.
Four Poems
by F. Daniel Rzicznek
The bones and crosses left out for him an emerald

All over town I dragged it behind me like a wing
New Sisters
A Selected Text from Conjunctions:74, Grendel’s Kin: The Monsters Issue
by Selena Anderson
Quisa had fallen into the habit of disappointing herself, and then disappointing herself a little more, with the words she let slip from her mouth. She kept talking to people in this hungry, intimate way, as if they too had spent the time of their lives in their heads and read the warning labels too closely and worried irrationally about their lymph nodes. Accidental confessions are what these amounted to.
Thrown
by Roy Kesey
Four cops come. Both parents are arrested, D&D. The children—William, six, and Stephanie, three—are taken by CPS.

The neighborhood will be quiet for almost two weeks.
We Are All Breakable, Ready to Break
A Selected Text from Conjunctions:74, Grendel's Kin: The Monsters Issue
by Lucas Southworth
After the bites. After the appearance of what, under one of the wobbly lamps in the employee dressing room/lounge, looked like three welts on T.’s forearm and two little ones on the webbing between S.’s index finger and thumb. After they (zombie fans all of them, horror fans all of them, gore fans all of them) whooped for October 1, whooped for the whole damn month, whooped for another year at the Haunted Farm, which was the only thing they loved in otherwise miserable Olney, Maryland.
Monster Training, Module Three
An Online Monster Supplement
by Samantha Stiers
After a long battle, the Department of Special Needs approved my request for a monster.

It should have been a good thing. There was a long wait list for the monsters, which had only recently been developed. During lunch at the treatment center, when everyone heard I had been approved for a monster, they clapped and congratulated me. I had been waiting for a monster for years, as had many of the other clients, but I still had misgivings.
The Moon Fairy
A Selected Text from Conjunctions:74, Grendel’s Kin: The Monsters Issue
by Sofia Samatar
illustrations by Del Samatar
When the Moon Fairy arrived, blown in through an open window one summer night, we were all surprised by how much it resembled Sylvie. Of course, it was much smaller—no longer than Sylvie’s forearm, the perfect size to take its place among her forgotten dolls—but its small, shimmering face was a tiny image of hers, like a portrait cleverly formed from beaten tin.
Lychnoscope
From Watch Night
by G. C. Waldrep
that mineral sacrifice, nacre-pled
a knitted there

the commercial
pleat, which the body recognizes
squint
of your courtesy, liege & master
Camp Gesticuslapper
by Ben Miller
Coworkers drop me off at a cutting-edge camp for the talkative so I have people other than them to bore for two weeks such as the doorman with the bad left knee who I tell about my bad right knee as we are exiting applauding vehicles under upstate trees
More