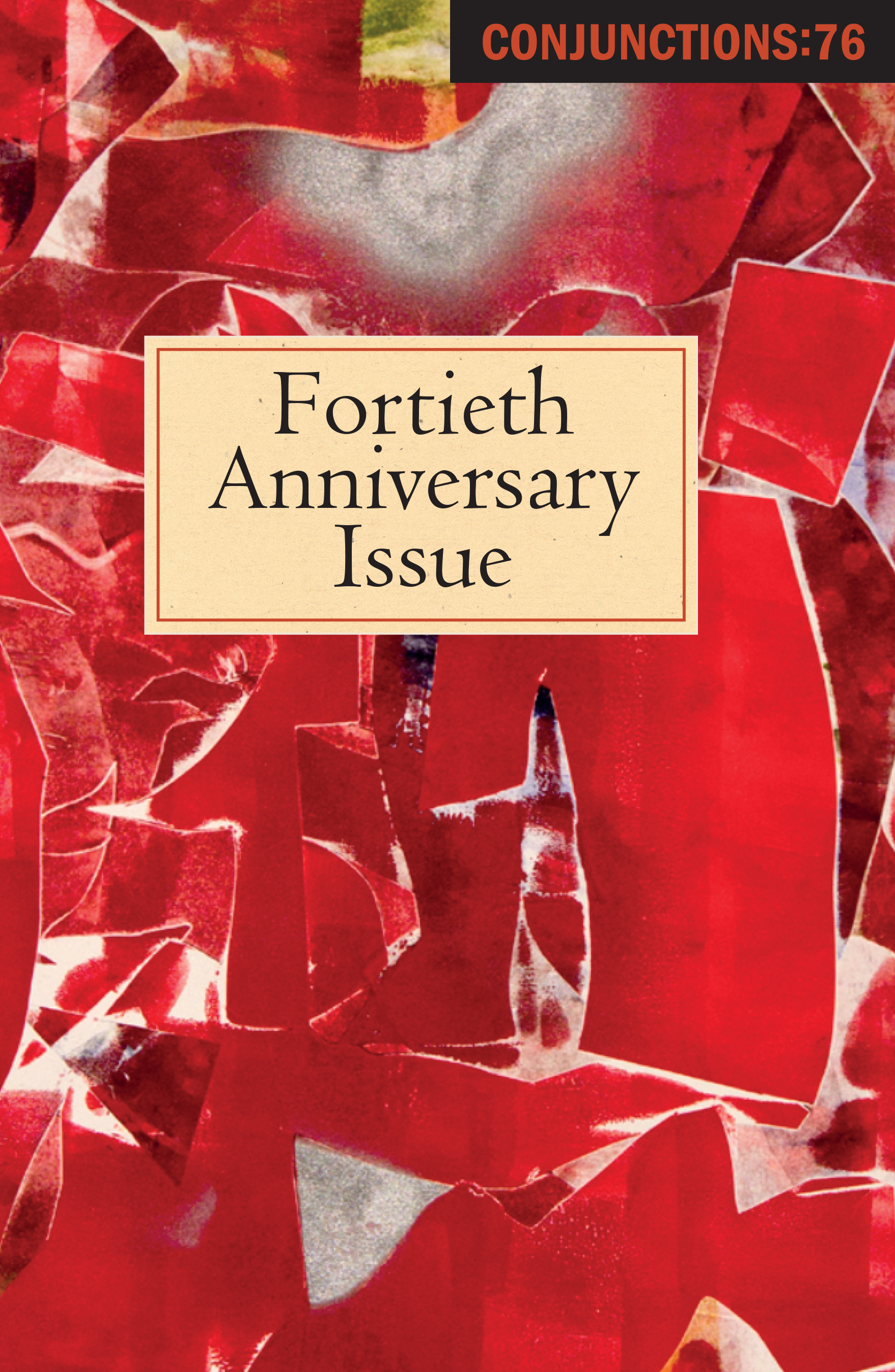 Nineteen eighty-one was also the year that Robert Creeley, Denise Levertov, Octavio Paz, Josephine Miles, Tennessee Williams, John Hawkes—all sadly deceased now—along with dozens of other writers, came together to contribute to the first issue of a literary journal called Conjunctions, a Festschrift in honor of James Laughlin, the venerable publisher of New Directions. Founded and edited by Bradford Morrow with the encouragement of poet and translator Kenneth Rexroth, Conjunctions has now published over one thousand writers, some at the beginnings of their careers, some avowed masters. Deemed a “living notebook” by its editor, Conjunctions continues to forge ahead some three decades after Bard College became its publisher, and four after it first saw the light of day.
View Issue

in a drawer Kept there
by a
What would you call

The bird is
bald She plucks
her feathers Her skin

is reptilian
bleeding Parrots
call one another

shares it Parrots
Sky Burial
by Reese Sawyer
The property consisted of a small washout pond, several tin structures, and a ranch house with a wraparound porch. The landlord was a tall tan man with silver hair and great big hands, impressive even in his early seventies. He spoke in fast and stuttered rhythms that made me want to clutch the dirt and hang on, but walked at a pace which indicated there was no other place he’d rather be in that moment than with me, touring his property, him explaining to me his rules.
Five Poems
by Amelia Van Donsel
I spot wind at the Texas inn where
my brother plays charcuterie, his head glowing with sweat.

before we have even eaten.
Five Cantos
by Sherah Bloor
Sanjay’s stepmother enters the dining room and
his monitoring bracelet records a flutter in his pulse.
Dr. Cameron shows the assistant how he applies
an electrode to the surface of the patient’s brain.
She sees a mountain blow away like it’s sand.
After the Eye Surgery,
by Jesse Kohn
“Well, technically batshit,” I’d tell him, and I’d remind him that, seeing as we were trapped in this cave—“Cave?” he’d say, and I’d say, “Yeah, the cave we’re recovering from eye surgery in,” and he’d say, “Oh right”—and that seeing as we’d be thus—“pardon the expression,” I’d say—interred for at least as long as it took to recover, that the cave would be, for all intents and purposes, what we’d have to mean, from here on out, by the word world; and thus bats, who were the only creatures still flitting in and out of the cave’s narrow apertures and thereby participating in the larger ecosystem and importing to an otherwise inhospitable environment the most basic elements needed to sustain life, their excretions would need to be, for the foreseeable future, what we’d have to mean when we’d say sun.
Five Poems
by Alex Braslavsky
And all manner of head swerves.
Three people flew past me, but did not see.
It’s not even clear what happens to the chicken on the bobsled.

Trails . . . that slither with their cake.
Will you have more?
The Holographer
by Julianna Baggott
I remember how, when we got word that it was okay to emerge, my parents opened the front door. My mother was holding an aluminum baseball bat, my father had a shovel. The three of us were in our hazmat suits. (Mine had grown a little taut. I was eleven years old and had gotten taller and rounder.) Our breaths were trapped in our masks.

How long had we been indoors? Time was hard to figure. It had been well over two years. But had it been three?
Two Poems
by Chanda Feldman
his bright impatiens in their beds, apple trees,
to which he earlier rose on his cane and leaned

until among their snow blossoms alongside the bees,
surrounded in floral-sweet fragrance,

from where your father says, And, no one wants you to be
bitter.
Three Poems
by Nancy Kuhl
Like the ancient glass marked

with fleck and mottle. But O—
her silver likeness. Long forsaken

the mirror: the edges, now light moves
straight through. Shrug or shudder.

Getting Out of Janesville
by Angela Woodward
Because they’re in Florida, their position on the terrace is glorified with a gigantic orange ball sinking into serene water, streamers of pink snaking along the blue, the whole thing so … so … validating? And the pelicans! “Look, dude! Pelicans!”

“But that’s the point …” the equestrian’s former friend muses.
Burn Scars
by Jaime Robles
Fire hurtles past on both sides bubbling black
At the edges. He wakes to a solitary yellow line
Glowing desolation. House truck dog are gone
Evaporated into red sky and patchy earth, snags
Decorate the darkness. Out of his scars grow
Thin buds. Imperfect impermanent incomplete,
He falls back as if falling into a pool, arms out
The Parenthesis Hunter
by Mikaël Gómez Guthart, Jesse L. Anderson
Book thieves as well as purloiners of ancient maps and medieval spell books, whose superficially absurd tactics often belie a mastery of their skill, are both well-known and feared by booksellers and librarians. A list of the various methods and stratagems used to outwit an employee’s vigilance would be endless, and while vendors have certainly come up with more or less effective techniques to stem this scourge, the fact remains that to this day none has managed to catch even a single parenthesis hunter in the act.
Poem Called “The Lie” After the Poem by C. K. Williams from Which It Takes Its Last Two Lines
by Susan Wheeler
When you think of white do you think of Rembrandt
in darkness          pockmarked     a sieve or a monkfish
Ahead now     ahead then:       ash        scrub pine        shade
and Penny –– then twelve        then my brother’s sole friend
Seven Poems
by Graham Foust
To sing’s to field thought’s
failed arrow, then drop it,

its record all rumors, bits
of lithic in its meat,
Four Poems
by Theodore Worozbyt
Underneath the electric microscope frass gathered like a word no one could pronounce, or something children left in a cage. Sugar ants were gorging on the corpse of a cicada next to the front door. Soon four golden mounds were theirs, to carry back in their lemony bellies to the queen. I have a box of nine suns set on spikes, a pair of gray bags concealing speakers. I am your teacher, said the teacher, alone in a room. If there is a predicate to this.
3 Photos of Us Laughing in the Public Fauna
by Maura Pellettieri
A hole in the sky
is what it looks like. Something that will be replaced
by color, which is a kind of
false answer, and yet the only real truth
in this world. The only “real truth”
by which I mean
forgiving. Fog is made virtually
Red Puncta: Poems
by Jenny Xie
Of the foreground, we will not speak. Look past the blotted figures, the stiff line that parts glaucous air from ground’s teeth. Forfeit faces. Alight instead on the twine that screws hands together. Gelid landscape, chromatics at life’s edge, those pant bottoms burnished to peasant gray.

Articulate Body
by Supritha Rajan
That death measures out
the immeasurable—sands
fused to a melted stream,
the minutes
hardening to a glass pane
against whose cool
we lean our heads and watch clouds
unbutton to rain.
And inked its quake on white.
From The Hölderliniae
by Nathaniel Tarn
The roses never looked so good before we gained a dormant garden
help. But roses burn in just one day of this appalling desert heat. An
effervescent sun burning the roses as I must wish it would inflame all
features of the abhorrent politicians plunging a nation into ruin ... and archaeology! We look in vain for faces from a human past.
Five Poems
by Rae Armantrout
Then geese cycle madly
across a pond
like Wile E. Coyote
three feet past the cliff—