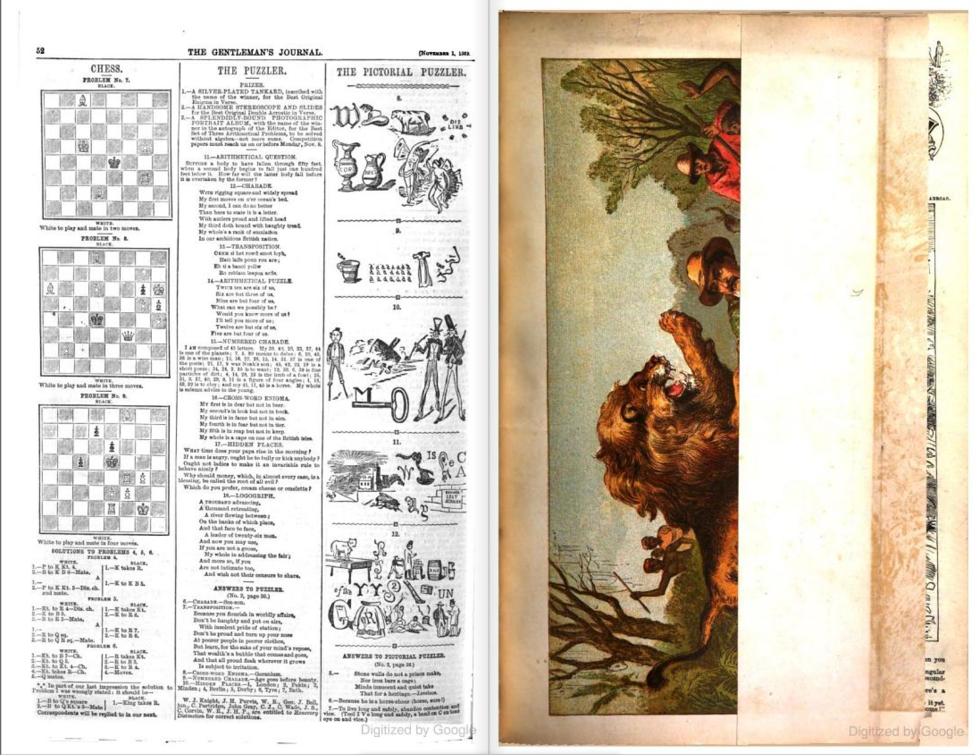 
It was the morning, and it was putting on airs
like a derby with a white geranium in its band.
The gentleman was in his handsome marble bath;
the poorer people were ironing their money,
having learned how nicely it keeps when it behaves
like paper. The stereoscopes with their fair enigmas
had been abandoned at their stations
by editors now going cross-eyed in the bar
o’er anagrams of evil: veil, vile, live,
or, why not, ilve or vlei, rank bubbles
rising in their beer, and you are handsome
as an antler, creaming in your clothes
while the geese call, up over your head, in the sea air,
to share the rules of the place, that anybody who wants
can take a dirt bath, so long as they don’t mind
it up their nose or in their eyes. “So, queen,”
one calls to you—an honorary distinction—
“it’s time to set you fine people
an arithmetical puzzler. Here it is:
“Suppose a body to have fallen.
Suppose a second body begins to fall
in emulation. Suppose the latter
wants to overtake the former. One figure
falling splendidly, solemn and composed
to his reward (a cheese omelet or a beer),
one reaching, rooting, delving through the air.
Angry, proud and insolent, the late-comer
advances, retreats, advances.
"It’s Monday in wherever.
Bubbles rise. Fine particles of dirt.
The first body falls like a portrait
of a falling man. The second kicks,
looking for an angle. Which do you prefer, the ambitious
or the entitled one? Does the leader’s
repose begin to cloy? Is the competition rigged?
Sure! Yet here they are now, face to face at last, composing
an intimate figure, a double acrostic of body parts.
Now suppose a transposition…” But the geese
have moved on, and their last words
are too quiet to reach you
where, for now, you live. 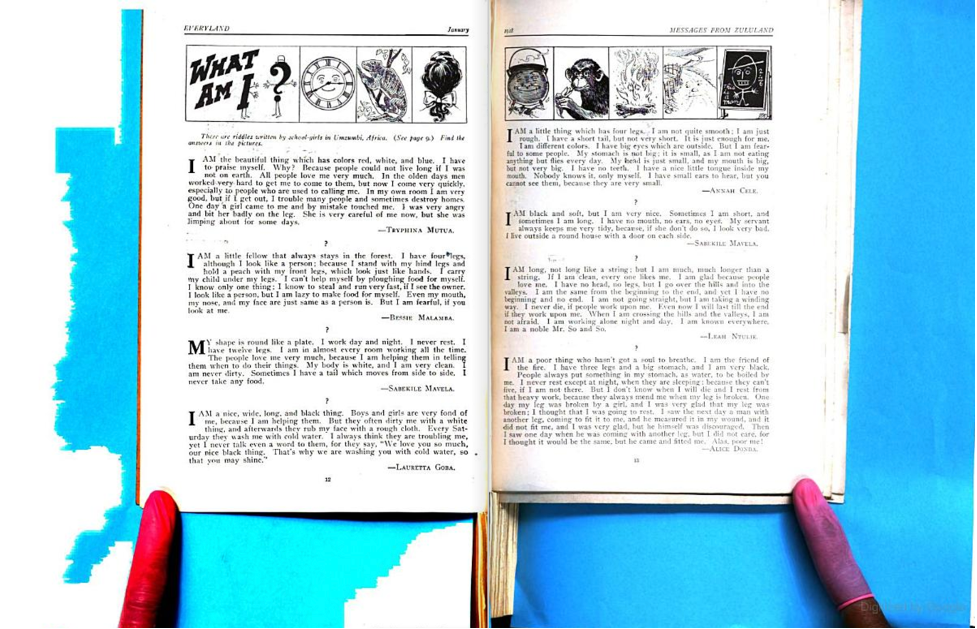 
What am I? I look like a person
but I am not quite a person.
I have a dirty little tongue
inside my mouth, but nobody can hear it,
only myself. My red hands look like hands
but they are not, although I have not yet found out
just what they are—string, or cloth, or water…
People always say to see page 9
for the answers, so I go, over the blue-black hills
and into the valleys, taking a winding way,
looking at the wide shape of the day,
the boiling blue over my head, although
I have no head. I don’t care! I am a beautiful
so and so! I have just one eye, but it is big enough
for all the colors: red, white, peach,
rough, Saturday, girl. I love my teeth,
so small and white. I love my stomach.
My body is riddled with nice wounds.
They will never mend. Even my face
is a wound—that’s why I shine.
The day is soft as praise. The riddle
is the answer. I know the fires
are beginning. I know I’ll have
to leg it. But not yet. 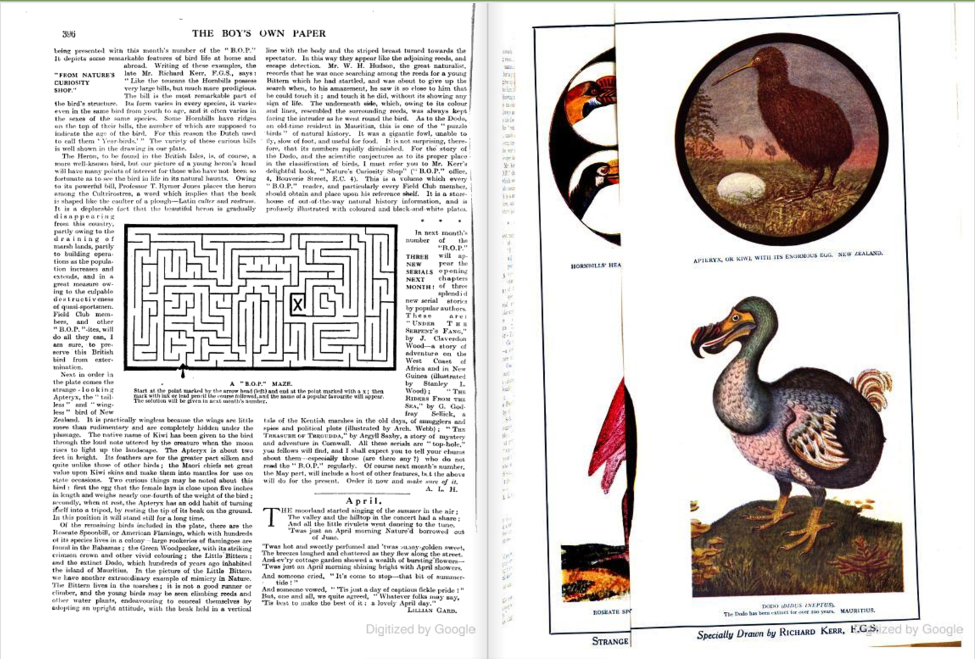 
The apteryx that morning had cried so loud
that I gave up on my adventure story, in which fanged flamingos,
gigantic roseate forms, had just surrounded the deplorable
egg smugglers and were, I expected, about to bite,
a surprising plot turn I had been expecting for chapters,
that is, months (this being a serial feature). I closed the book,
the April number of The Bird’s Own Paper,
and set out towards the rookery, where the apteryx,
captious creature, burst out of the adjoining
cottage garden with this to share:
“Not unlike you, chum, I am wingless and tail-less.
This came upon me nearly sixty-three years ago
and I have come to value my rudimentary body,
and take pride in standing upright and the dance I do
now and then with another Kiwi—splendid fellow,
top-hole. I refer to Mr. Argyll Saxby. Now, ‘twas
a hot summer’s day on the perfumed Coast of Africa,
and Mr. Saxby had just—” With a light laugh,
I stopped him. “I suppose you are about to tell me
that Mr. Saxby escaped a pride of egg smugglers
with little more than his feathers and a tale.
I’ve read that story. You start at the arrow
and end at the x.” Mantling, the apteryx
made like a dodo and disappeared. But now,
Mr. Saxby haunts me. I find that, on hot
June days, in the striped green-golden light,
I strike curious attitudes, resting my bill
on the street to resemble a tripod (which
keeps me grounded), or dance with the African
moon, hot with conjecture under
my silken feathers. I use the inked tip of my bill
to follow the maze that comes in the B.O.P.
every month, and know I can expect to lay,
in a day or two, a splendid crimson egg. 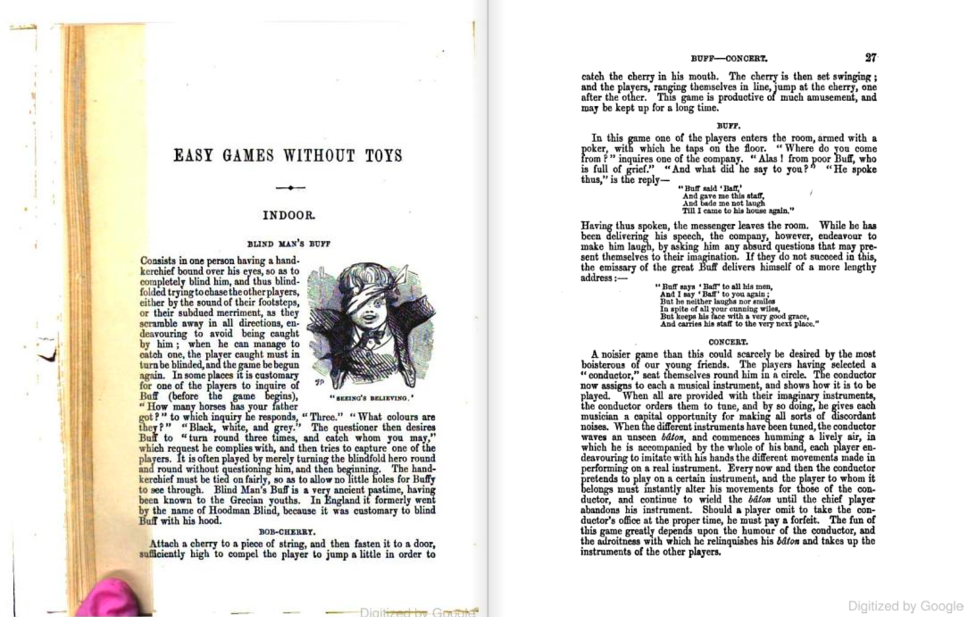 
In this game you enter the room
completely blind. Subdued noises, footsteps
circling. Speech comes from little holes
called mouths. “Where did you come from?"
hums your father. You were sent, from a certain address,
but it is customary not to answer. Now, an unseen hand
takes away the blindfold. Your father leaves the room;
a hooded emissary (pretend not to catch on, but this must be
your father in a hoodie) enters in his place, conducting
a toy horse on a string. While he plays with it,
the company is provided with certain
imaginary instruments—different for each one (yours
is a—no, a—but who can say?) and compelled
to imitate with all adroitness the movements made
in playing on a real one. The hooded “conductor”
waves an imaginary baton, and now you are
taking up the tune, the one that begins, “Buff said Baff,”
when next to you the player in the kerchief, fairly ancient, says:
“You have to, depend on it, believe your instrument
is real. If you don’t succeed in this, buff-baff, the whole will be
one great discordant noise. I tried and tried, but could not
carry a tune, and after that, poor me, I forfeited
all easy grace—not merely cherries, but the desire for them.”
At this the Hoodman takes a poker—it’s a real one—and
swings it at the player’s face. With a sort of
little wave, the poor player folds to the floor.
When the next player forfeits he will in turn
be blinded, and the game begun again.
This may be kept up for some time. 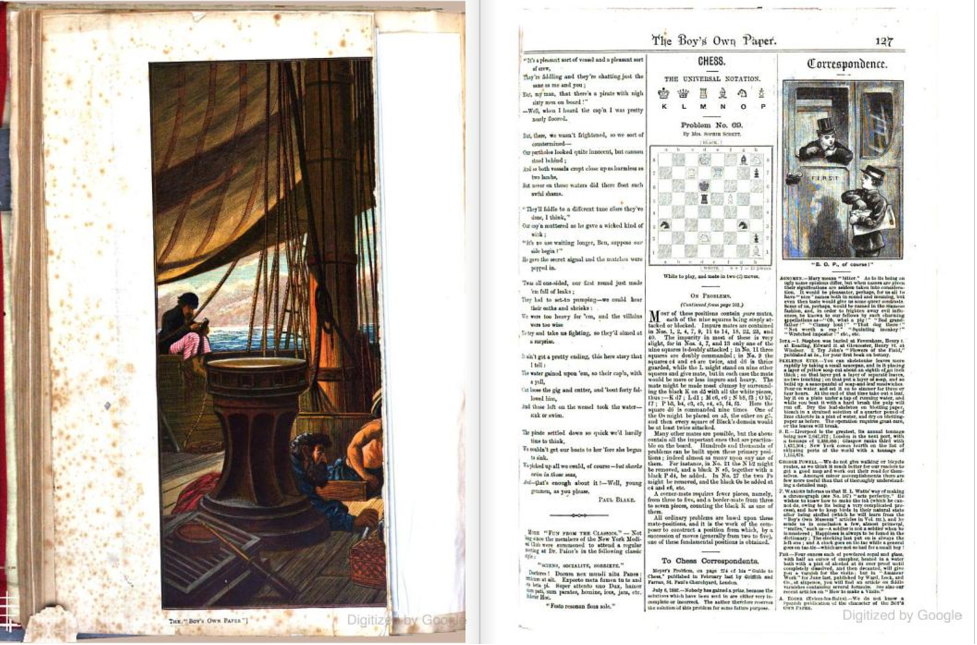 
It was sort of fun the way the imposter shrieked
as he sank in the shark-jammed seas.
On board the cap’n, over sandwiches, was skeletonizing
a leaf, tapping off the pulp, settling it on blotting paper
to dry—"‘Tis harmless enough,” he winked,
“Like the classic chess problem in which White,
a prize lout in stockings and a pretty yellow number
cut awful small, eyed Black, a nice boy
ward of the state, and muttered, 'I’d
tap that,' at which a fight broke out amongst those
who stuff their own members for future publication
(please! Ain’t nobody trying to look at that)
while violins fiddled a succession of formulae
that simmered down to this: sink
or sink. Wait long enough and Mrs. Nobody
will skeletonize all you creeps. Here,
was that a yell ending in a thick sort of
'pop'? You man the pump down all the
leaking hours… Just ‘bout bath time, mate.”

—The Boy's Own Paper, Volume 5. United Kingdom, Leisure Hour Office, 1882.
https://www.google.com/books/edition/The_Boy_s_Own_Paper/mT4xAQAAMAAJ?hl=en&gbpv=1
Shelley Jackson is the author of Riddance (Black Balloon), Half Life (HarperCollins), The Melancholy of Anatomy (Anchor), hypertexts including Patchwork Girl (Eastgate Systems), and several children’s books, including The Old Woman and the Wave (DK) and Mimi’s Dada Catifesto (Clarion Books). She is known for her cross-genre experiments, most notably SKIN, a story published in tattoos on 2,095 volunteers.