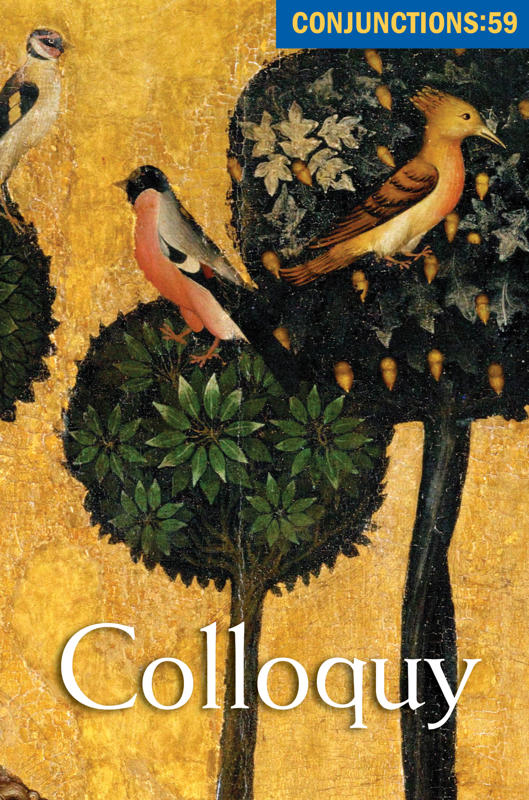 Every issue of Conjunctions could, I suppose, be construed as a colloquy. The idea for this issue was to assemble works that were not bound, even loosely, to any specific theme. It was a concept thwarted from the start, as the reader will see. These fictions, poems, essays, letters, and pieces that defy genre definition—works by some of my favorite contemporary writers—draw on quite different linguistic approaches to quite different thematic visions, giving the issue an almost symphonic quality with unexpected harmonies abounding from page to page. Once it was understood that despite ourselves we did have a theme, however subtle, the portfolios on the Word (co-edited by Robert Coover and me) and the Monstrous (edited by Peter Straub) came into being, adding new depth and dimension to our colloquy.

We are particularly honored to publish a generous selection of William Gaddis letters excerpted from the forthcoming Dalkey Archive volume of collected letters. Renowned for the towering achievement of his novels, Gaddis was a very private man. His correspondence, printed here for the first time, spans the arc of his life, from the earliest days when he was beginning to research and write The Recognitions—that touchstone masterpiece that infamously drew critical disdain when originally issued in 1955 and is now required reading for anyone interested in American fiction—to his fourth major novel, A Frolic of His Own, an indictment of the jurisprudence game, just as the 1975 J R examined the lust for money in its myriad forms. In his letters we witness Gaddis as son, father, friend, colleague—at all times intellectually engaged and curious, hilariously self-deprecatory (consider his self-portrait reproduced here as a frontispiece!), critical of fools, deeply empathetic and precise, and finally as complex and insightful as the novels he wrote. Many thanks to Sarah Gaddis, Martin Riker, John O’Brien, Steven Moore, and the Andrew Wylie Agency for their help in making it possible for us to publish this important correspondence. Thanks, too, as always to my remarkable staff editors—Micaela Morrissette, Pat Sims, J.W. McCormack, Nicole Nyhan, Andrew Durbin, and Soli Shin—with whom I have the privilege of working. True colloquists all.


To see announcements of new issue themes or to keep up with our issues as they develop, follow us on Facebook and Twitter and join our newsletter.
Cover art is a detail from Jesus in the Olive Grove, by the Master Vyšší Brod (the Master of Hohenfurth), c. 1350. Narodni Galerie, Prague, Czech Republic. © Erich Lessing.

Dogs of Cuba: The Buddha of Vedado