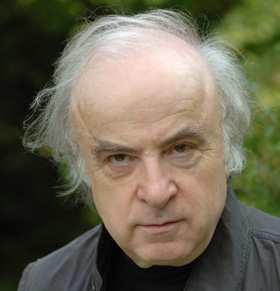 Norman Manea is the author of October, Eight O’Clock (Grover Press), The Years of Apprenticeship of Agustus the Fool, and The Black Envelope (both available from Polirom). In 2006, he was awarded the French Prix Medicis for Foreign Literature for his memoir The Hooligan’s Return (Farrar, Straus and Giroux). He has received a MacArthur Fellowship, The Literary Lion Medal of the New York National Library, the National Jewish Book Award, and the International Nonino Prize for Literature. Manea teaches European literature and is writer in residence at Bard College.

Two Poems
by Susan Stewart
January 19, 2022
Now that the little lies
accrue into the vast
incredulity, fear on fear
swells: a wave.

Slipping down the dune or
climbing? Who can tell?
The small cries, growing smaller,
fly past and vanish.
Sleeps
by Miranda Mellis
January 12, 2022
The hope of non-sleepers is sleep, sleep is the food of all living presence, and time is the food of sleep. Time is a physiological condition, in addition to being a pit of holes. Sleep and wake are genres. Despite all appearances to the contrary, and notwithstanding dreams, sleep is a season. If you jump ahead, skip episodes of sleep, fragment the night, you lose the poetry of daytime. Daytime becomes a plot-driven slog; all it thinks about is sleep.
Sane Places: Seven Poems
by Timothy Leo
January 5, 2022
The trees conspiring to create eternity again.
Our bodies with every tendon, sheath, and auricle
intending to grow old again. Breath finding wings,
lungs, skin. Hearts becoming rooms, again.